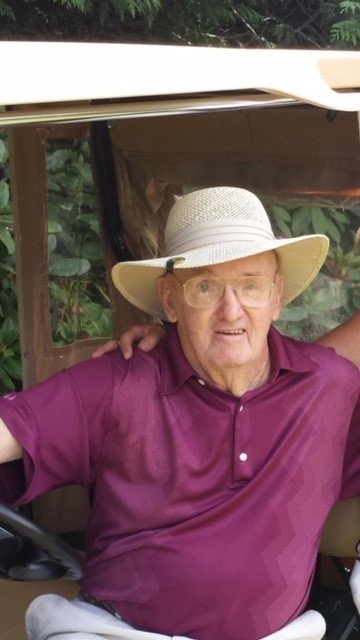 Scotty Robinson passed away peacefully in his home on May 20, 2019.  Scotty was born on April 22, 1925 to John and Leah Robinson in Rockhampton, Australia.

He served in the coast guard and later joined the merchant marines where he was able to travel the world.  In Portland he met and married the love of his life, Joyce Kramer, they were married in January of 1952.  Together they had two daughters, Debbie and Diane.

Scotty always had a passion for learning new things especially those that sparked his curiosity.  He was a lover of life, always up for new challenges and adventures.  He was an avid golfer, in fact one of his proud accomplishments was getting not just one but 5 hole in ones in his lifetime of playing golf.  He also enjoyed bowling and played in several different leagues.  Both in golf and bowling he met many lifelong friendships.

Scotty was preceded in death by his wife Joyce Robinson.  He is survived by his two daughters, Debbie and Diane, two grandchildren Brett and Taylor and one sister Nola.

There will be a celebration of life, Sunday, June 9th. 2:00 at Glendoveer’s Von Ebert Brewing.

To plant a beautiful memorial tree in memory of Selwyn Robinson, please visit our Tree Store