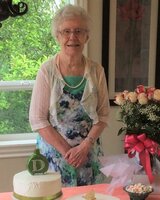 Dolores lived a long, fulfilling life. She was born on the family farm near Nortonville, North Dakota on May 12, 1926. Her parents were Fred and Jesse (Colby) Hollingsworth. Dolores attended Glenmore School in Glenmore township and later high school at the Nortonville school. After high school, she moved to Jamestown and worked at the North Dakota Hospital. While living in Jamestown she met and later married Alfred “Red” DeMars. In 1953, Dolores and Red moved to Portland, Oregon and had ten children. Dolores was very busy raising her family. She not only worked for various cleaners as a presser, but also volunteered for numerous organizations. She was a Den Leader for Cub Scouts, Group Leader for the Blue Birds and Campfire Girls and served as President and Board Member for the Parent Teachers Association (PTA). She later became a member of the North Portland Eagles and the Gateways Elks where Dolores and Red would often go dancing and play cards with their friends. She also served as Secretary and Treasurer for the Widows of the Elks. Dolores enjoyed canning foods, quilting with her friends, and watching sports. Dolores served as score-keeper for her sons’ and grandsons’ baseball teams. Her favorite baseball team was the Dodgers and favorite basketball team was, of course, the Portland Trailblazers. She also enjoyed attending her grandsons’ go-kart races. Dolores is survived by nine of her children Gary, San Francisco, CA; Arlen, Happy Valley, OR; Robert, Gresham, OR; Vernon, Vancouver, WA; Gregory, Portland, OR; Lynetta Walden, Jamestown, ND; Jeffery, Vancouver, WA; Corinna, Happy Valley, OR and JoNell, Happy Valley, OR. Dolores has 17 grandchildren and 15 great grandchildren. Some of you may have seen the Article written in the Jamestown Sun about the arrival of Dolores’ two newest great grandchildren, Knox and Addison. Both Knox and Addison were born on the day of Dolores’ passing. Her living sisters include: Hazel Fox, Holdrege, NE, and Shirley Rott, Jamestown, ND. Dolores is predeceased in death by her parents, husband; daughter, Jana Bailey; grand daughter, Nichole Walden; brother, James Hollingsworth; and Sister, Edna Neuman. The family requests, in lieu of flowers to make donations in memory of their mother: Brighten Hospice 8050 SW Warm Springs St., Suite 205 Tualatin, OR 97062