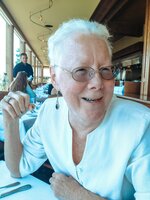 Janet Louise Fenimore passed away on October 6, 2021 in Gresham, Oregon after a long battle with metastatic ovarian cancer. This came after a 15-year remission from breast cancer. She was born December 11, 1943 and was 77 years young. She is the daughter of Alvin and Mary Moneybrake of Michigan, and leaves to mourn her brother Alvin(Kathy), sister Kay, Stepdaughter Abby, and Granddaughters Emily and Leslie, along with many great friends. It would be wrong to say that Janet "lost" her battle because she never stopped fighting. No matter how sick she was, she was determined to complete daily tasks and keep up with Life. Through her determination, we know what resilience and perseverance truly looks like. There was no quit in Janet. Janet would be best known for her dry sense of humor, love for music and cooking or more so, feeding others. She was stern but kind. She was accountable, dependable and consistent for everyone in her life. She will be missed by many. Janet will be buried at Sunnyside Little Chapel of the Chimes and we invite you to visit her site anytime to say your goodbyes.