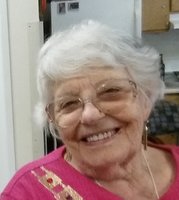 Dorothy Frances Ellingson passed away peacefully in Portland, Oregon on December 31, 2019 Dorothy was born on October 7, 1928 in Gresham, Oregon to Albert and Frances Troge. While Dorothy was in school she enjoyed playing the clarinet for the band. She graduated from Gresham High School in 1945. One of Dorothy’s proud accomplishments was setting up fundraising for the government during the war. She later volunteered for years with Toy and Joy Makers of East Multnomah County to bring joy to children at Christmas. She also helped with fundraising by having a garage sale every other weekend for over 4 years. Through donations from the community, and her hard work she was able to raise over forty thousand dollars to go towards a day program for young adults with developmental disabilities. In 1962 she married Harold Ellingson, right in the front yard of the home Harold owned, a beautiful home that was a road house during prohibition. Dorothy was always known to be quite sociable, and made friends with everyone she came across. She loved to sew; in her later years she would forget how to thread the machine, but with the help of her friends she was able to sew a beautiful quilt for her daughter. She also enjoyed machine embroidery, and square dancing with Harold. Dorothy was preceded in death by her parents, Albert and Frances Troge, her husband, Harold Ellingson, Harold’s son, Raymond, and Donald Neuhaus, her son from a previous marriage. Dorothy is survived by her daughter, Deanna Burris, her sister, Sharon Lehr, Harold’s children, Ronda Daus, Deb Allen, Diane Fitzjarrell, Kevin Ellingson, 14 grandchildren, 20 great grandchildren and 2 great great grandchildren. In lieu of flowers the family requests that you donate to the The Alzheimer’s Association Oregon & SW Washington, 1650 NW Naito Parkway Suite 190, Portland, Oregon 97209 in her memory. A memorial service will be held on Saturday Mach 21, 2020 at 1:00pm Pleasant Valley Community Baptist Church located at 17608 SE Foster Road, Gresham, OR 97080.